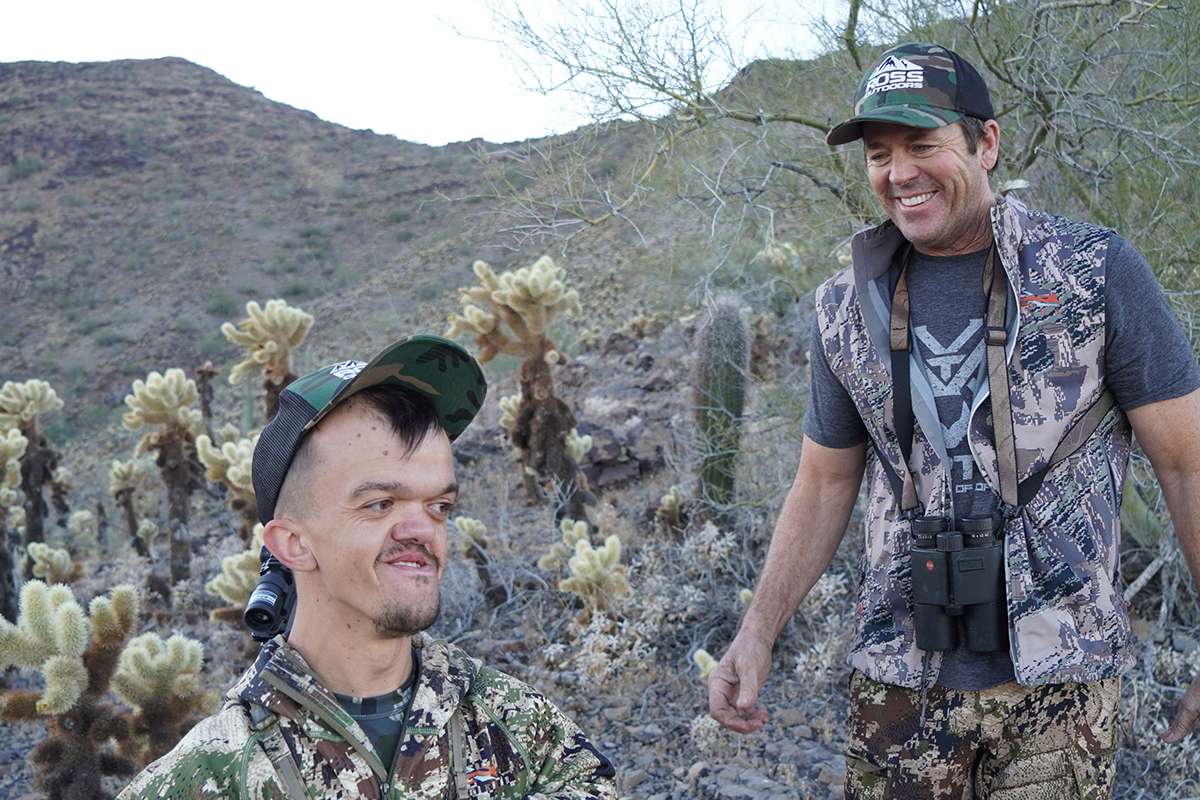 Bighorn sheep hunts are some of the most coveted adventures a hunter can go on. From the brutal country that these animals call home to the sheer magnificence of the species itself. To most of us sheep hunting is more of a fantasy with the extremely low draw odds. Arizona hunter David Vesa stomped those odds right into the ground after drawing a Desert Bighorn Sheep tag with only two points in his home state. A feat he accomplished before ever drawing an Arizona elk tag. He never thought he was going to draw a sheep hunt. In fact, it took him a moment to realize why there was $300 (tag fee) missing from his account. The odds were against him, and he beat them fair and square. David was about to go on his first bighorn sheep hunt, an animal that he was yet to lay eyes on.

There are a lot of pressure on these hunts. Bighorn sheep hunts aren’t something that one can just put in for and go the next year. “When you’re out there, it’s now or never” David says. For that reason, David had the whole month off from work. Being unfamiliar with both the species and the terrain, he wanted to ensure he had enough time to make it happen. David would be joined by his good friends Ross & Josiah Richards, owners of Ross Outdoors Pro Shop in Phoenix. Along with providing comradery, Ross and Josiah both had sheep hunting experience and could help cut the learning curve for David. I asked David what his expectations were going into the hunt. Truth be told, he didn’t really have any expectations in terms of trophy quality. Sheep hunts are so far out of reach that his expectations were null. He was just excited to get out in the field and enjoy his once in a lifetime experience.

The front end of Vesa’s hunt was pretty slow. In fact, they didn’t even find a shooter ram for the first few days. Only ewes and small rams showed themselves. Slow days can test us in the field, even more so on a once in a lifetime hunt like David’s. The pressure that comes with this caliber of tag can weigh heavy in one’s pocket and mind. On the third day, everything changed.

It’s funny how quickly things can turn around if one has persistence. If you aren’t looking, then you aren’t going to see anything. It was the evening of the third day and David’s camp spotted a shooter ram. David looked at the ram and knew he immediately wanted to go after him. Three quarters of a mile was all that separated him from making his dream a reality. Before he knew it, David was looking at that ram through his rifle scope. An experience that was surreal to say the least. A shot rang through the country, but it was fruitless. David had missed. Fate had a different plan though.

David missed the 500 yard shot at the original target ram, however, that miss drew the curiosity of three other rams that were previously out of sight. Now four Rams were bunched together on the mountainside. One of the four rams was noticeably larger and older than the ram he had missed. The rams bunched together and the team took time to confirm that David’s first shot was a clean miss.

Time slows during moments like these. Seconds feel like minutes and minutes feel like hours. Even though it only took about three minutes for the ram to present a shot, that three minutes felt like three hours. Finally though, the warrior ram stepped out above the rest and stood broadside. “It’s now or never,” David thought to himself as he settled his crosshairs on the shoulder of the ram. The shot rang out, the recoil of the gun broke his line of sight to the ram. The next thing he heard was Ross saying, “HE’S DOWN!!!” David was in disbelief. He had just accomplished something that most hunters will only dream of.

After watching the Ram expire through their glass, high fives and hugs were exchanged. Shock ran through the group at the realization that David had just accomplished a truly amazing feat. Their elation was well deserved but the adventure was just beginning.

There are few things that will steal the voice of an ambitious man like David, but in this moment, walking up to his ram, he was speechless. He looked back towards where they glassed the first ram up from and couldn’t believe it. It all happened so fast, and the results of hard work, friendship, and persistence lay before him. David got lost in the rams horns. He admired the scars and markings, wondering what kind of stories they could tell.

Pictures were taken, smiles were shared, and everyone was on cloud nine, however, the realization that they had a lot of work to do was just setting in. Their plan was to pack out the head, hide and as much meat as they could that night and hang the rest up on the hill to recover the following morning. Breaking down the ram proved difficult in the steep terrain but they got it done and began their trek down the mountain.

“The pack out was so gnarly,” David described. It was super steep, super windy, and the rocks were about as loose as they come. Everyone kept falling victim to the sheep country beneath their boots. They coined the term “cactus breaks,” as this is when they’d take a break in order to pick the cholla cactus needles out of themselves.

For the crew to travel .9 miles, it took them 2 hours and 45 minutes traversing through the pitch black. And while it was tough, it was one of the coolest things David had ever experienced in the mountains. “The more it sucks, the better it is,” he described. He enjoyed the test of physical and mental fortitude set before him on this hunt. It wasn’t until well after midnight when they arrived back in camp. Even being so late, nobody could sleep. Adrenaline was still high. The group stayed up recounting the events of that evening. The whole experienced was unparalleled.

And just like that, David Vesa’s once in a lifetime Arizona Desert Bighorn Sheep hunt was put to rest. It was time to close up shop. We wait so long for regular hunts to come about, but a hunt like this? That sits on a different level of anticipation, to see it end can be bittersweet. There are hunts that we wish could last forever, and your once in a lifetime sheep hunt is certainly one of them. Looking back on this surreal experience one phrase sticks with David now. “Anything is possible.” Because of that, David started immediately researching other possible sheep hunting opportunities out there. Once a sheep hunter, always a sheep hunter.

Should I Hold Out for a Trophy Tag?